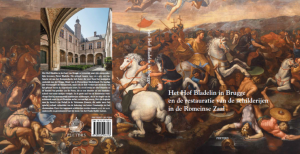 New Publication on the Bladelin Court in Bruges

On the occasion of the finalization of the restoration of the monumental paintings of the Roman Hall of the Bladelin Court in Bruges, a richly illustrated book is published by Peeters. The four year research and restoration project was supported by the Fund Baillet Latour and coordinated by prof. Lieve Watteeuw. The new publication is divided in four sections. In the first part, the figure of Pieter Bladelin, the context and the building history of the Bladelin Court are discussed. In the second part, the nineteenth-century history of the house is discussed, as well as the important intellectual, socio-religious and artistic role of Father Leo de Foere in Bruges. The third part focuses on the Roman Hall, where the copies of around 1700 of the Cycle of Constantine and the Fire in the Borgo are kept. These four monumental copies fit into the broad and centuries-long reception of Raphael’s paintings in Europe and into the rhetoric of emperor Constantine’s victory and Christian faith. The last part of the publication deals with the research and complex restoration of the four monumental paintings by a painting restorers. A team of heritage specialists, curators, architects, art historians, imaging specialists and restorers contributed to this monograph ed. by Lieve Watteeuw. Essays by Jelle Haemers, Krista Dejonge and team, Till-Holgert Borgert, Marjan Buyle, Lieve Watteeuw, Roosje Baele, Jos Vaesen, Tania de Laat, Joris Snaet, Karen Bonne, Steven Saverwyns, Hendrik Hameeuw, Charlotte Sevrin, Jade Roumi, and David Lainé.