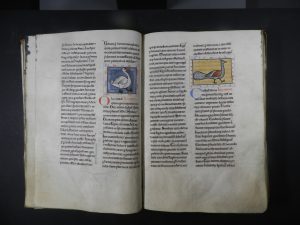 The former Cistercian abbey of the Dunes had an important collection of manuscripts dating from the 12th to the 16th centuries. From June 2020 on the manuscripts of the collection of the Mayor Seminary in Bruges are studied and conserved by Lieve Watteeuw and the team of the Book Heritage Lab (2020-2023). The project is supported by the the Fund Baillet-Latour of the King Baudouin Foundation and the Topstukkenraad. The first phase of the project is focusing on the conservation of the 13th century manuscript of Hugo de Folieto, the 14th century Ritual of the  Duines Abbey and 8 other manuscripts dating from the 13th to the late 15th century.

The abbey of the Dunes was one of the oldest and main Cistercian abbeys of the Low Countries. It was founded in 1128 in Koksijde and joined the Cistercian order in 1138. The Dunes had close connections to its motherhouse Clairvaux, but also to its two daughter houses Ter Doest (Lissewege) and Clairmarais (Saint-Omer). The Dunes and Ter Doest were both established with the support of the Count of Flanders, Clairmarais was encouraged by the Bishop of Tournai. The most precious possession of The Dunes was its collection of manuscripts (the so-called “Dunes’ manuscripts”), dating from the 12th to the 16th century. During the 17th century, the collection was expanded because the library of Ter Doest was incorporated with the one of the Dunes. As such, the library of the Dunes contained a wide range of books which the monks required for their daily religious life, such as religious treatises, Bibles, sermons, prayerbooks, but also various subjects as ancient literature, philosophy, law and science.