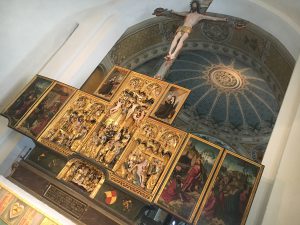 Denmark nowadays preserves four Antwerp retables and three groups of retable fragments; Finland one Brussels and one Antwerp exemplar; Iceland a group of retable-fragments; and Norway one altarpiece from Antwerp. Sweden possesses thirty-eight Netherlandish carved altarpieces, around ten retable-fragments, and at least two poupées de Malines (wooden statuettes of Mechelen). These remnants are probably only a fraction of the number that originally decorated the Nordic churches.

This LECTIO round table will address the export and the transport of the altarpieces to the North; the use of this artworks in liturgical rituals; the import and interaction between other imported or local sculptures; and the contemporaneous reception of the artworks in the North.

Participation is free, but registration is required via Lectio. Extended registration date: 12 September 2019.